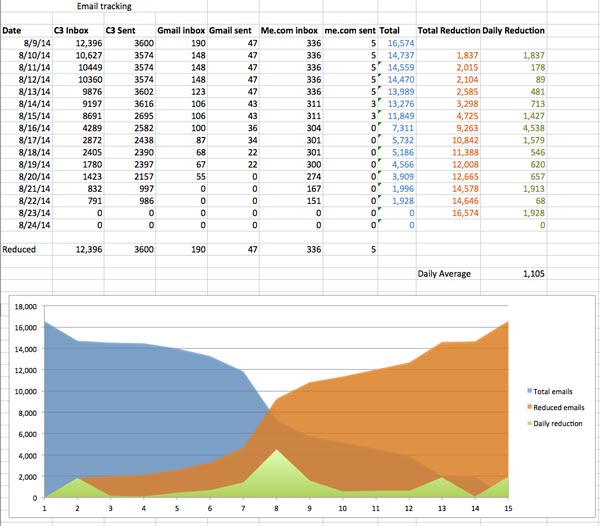 On August 23, 2014, I moved out of my email program. The place had grown crowded and overwhelming, a musty storeroom crammed with teetering boxes of stuff that was mostly necessary, but much too hard to manage.

I wanted to spend more of my time in the rest of my work, which is a lot more fun and many times more productive. I wanted to hang out in our team project-management app, where the light is better and there are other people. (And, not incidentally, I’m paying for it every month.)

So over the course of fourteen days — an hour before work, two or three hours after, and three weekends of very long days — I reduced my email from 16,500 and change to zero. Nothing stays in the inbox or sent folder for more than 24 hours. Now project information is where it’s supposed to be. I can work wherever I want. I can get in and out of email in a moment, because there’s nothing there to distract me.

Reviewing, sorting, filing and sometimes tossing over 16,000 emails is bound to yield a few insights, and one of mine is this:

I need to change the way I write subject lines.

Although I didn’t realize it until I started this project, my favorite subject line is apparently “One more thing”, usually sent as a follow-up to a phone meeting or an email conversation. Web programmer Matt Harbert has sent me dozens of emails with the subject line, “Update”. Both make perfect sense in the moment but are pretty useless later.

One larger agency that we work with often is fond of keeping strings going, for days at a time, for a dozen or more messages each. Their projects often change names a couple of times before they’re finished, starting out as “Q2 Initiative”, morphing into “Senior insurance touch”, and landing on “Zebra package” because the chosen concept has a zebra on it. I found at least two of these mammoth strings that included paragraph upon paragraph of thoughtful, meaningful discussions and ideas, but none of us ever mentioned the client’s or project’s actual name.

Designer Tracy Smith’s subject lines vary according to her mood, and tend to be short, sweet, and colorful: Logo. Photos. Stuff. Is it this one? This one. Done. Crap. Hysterical. Bugs :}. More info. What the hey??? WTF? Hah! Postcard. Concept. Revised concept. On another subject. (And lots of swear words).

Tracy’s are by far the most entertaining, but when you’re trying to sort, file, or locate information, Becky’s and Heather’s are much more useful. Colleague and fellow creative director Carlos Perez maintains a similar habit, and adds the recommendation to keep email subject lines to 35 characters or less, which theoretically makes them less likely to get caught in spam filters.

We tend to work with clients for a long time, over many projects. Knowledge and information accumulate, which is one reason that I don’t toss emails indiscriminately when projects are finished. In my purge, I found a number of “What if’s…” and “How about…” ideas that weren’t appropriate for last quarter’s projects, but fit beautifully within that client’s goals and budget for next quarter. Now they are part of future agendas, and will be easy to find when our team (clients and C3) need them.

My new email resolution is to be much more specific in email subject lines, down to the job numbers. It might seem a little silly in the heat of the project, but it will make it easier on all of us later. And I know I’m definitely being kinder to my future self.